Neil Pasricha shares the recipe for resilience, an antidote for anxiety, and how his two minute morning routine primes each day for success. 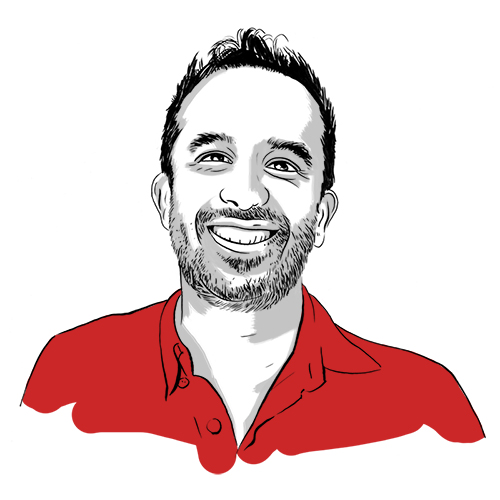 Today, I welcome Neil Pasricha (@NeilPasricha) to The Knowledge Project. Neil is a personal friend of mine, one of the most popular TED speakers of all time, a Harvard MBA, and the New York Times best-selling author of The Happiness Equation and The Book of Awesome.

Neil’s story is a fascinating one. After getting a divorce and losing his best friend to suicide in the same year, he found himself in a dark place that was difficult to climb out of. As a countermeasure, Neil started a daily practice of noticing and recording the many small pleasures that life has to offer — warm underwear from the dryer, the smell of rain on the pavement, or getting a trucker to blow their horn.

That list became a blog, that blog became a book, and that book became a sensation, selling millions of copies in dozens of languages all over the world.

After a decade at the helm of Leadership Development at Walmart, Neil walked away to focus his energies on discovering what makes people happy. He now serves as Director of The Institute for Global Happiness, a company dedicated to developing leaders, transforming teams and organizations, and helping people find joy and meaning in their everyday lives.

In this interview, Neil and I discuss parenting, teaching (and learning) resilience, the myth of work life balance, and why, in spite of unprecedented prosperity and luxury, so many of us are still unhappy.

What I learned from my parents was the model of resilience. The idea that you can add a “yet” to any sentence. Meaning, when I talked to my mom growing up, she’d be like, “Well, dad would take me to the German club and I said to myself, ‘I don’t know how to ballroom dance yet. Or I don’t have any experience working in a Canadian company yet.’”

I made one day a week untouchable. Guess what would happen on that day? Nothing. I would have no internet, no cellphone, no connection to anybody, not even my wife. Nobody could get a hold of me, no one could contact me. Nothing, I was literally untouchable. Guess what happened? Instead of writing 500 words through bits and sparks on a normal day, I wrote 5,000 words, like 10 days worth of writing in one day, a 10X increase in my production. That’s where my next book came from. I launched three books, my podcast from those days. Everything good that I’ve done in the last couple of years has only come from untouchable days.

It’s not work life balance, it’s a flywheel. The more energy you pour into either side of your life, the faster and more energy you can pour into the rest. I found that model so inspiring I was already doing that without knowing that that was a thing. I was always under the mistaken assumption that they were trade offs rather than a pie that constantly grows with maximum energy and no limits with it’s potential.

The three Ps of problems that’s rooted in cellphone addiction are productivity, physical and psychological. That’s rooted in the 40% of how we should be spending our time and we’re spending it the wrong way. I think that’s a big reason why we’re not happy today.

In this global community it’s important to develop resilience by giving ourselves games that we can win. Sign up for the marathon in the slowest category, tee off from the tees closest to the pin, rig the game so you can finally win something. Then you’ll feel better about yourself and you’ll use that confidence, that energy, to keep going.

People say to me, “Why isn’t there a good news newspaper?” I’m like, “No one would watch it. They want to watch the fire.” We want the race car crash, we want the hard hitting football. We want that stuff. They’re like, “Oh everyone’s rubbernecking on the highway.” It’s like, “Of course, everyone wants to see the accident.” We instinctively, biologically, evolutionarily want to see it.

Life is so relatively easy that we have lost our capacity to handle failure or even, and this is more important, perceived failure. So when you get two likes on your Instagram photo, it feels like I have no friends. The traumatic feeling of loneliness or anxiety or depression. These things are coming to us sharper and harsher because we have lost the internal systems to handle them.