Are Great Men and Women a Product of Circumstance?

Few books have ever struck us as much as Will Durant’s 100-page masterpiece The Lessons of History, a collection of essays which sum up the lifelong thoughts of a brilliant historian.

We recently dug up an interview with Durant and his wife Ariel — co-authors of the 11-volume masterpiece The Story of Civilization — and sent it to Farnam Street members. While the interview is full of wisdom in its entirety, we picked one interesting excerpt to share with you: Durant’s thoughts on the “Great Man” (and certainly, Great Woman) theory of history.

Has history been Theirs to dictate? Durant has a very interesting answer, one that’s hard to ignore once you think about it:

Interviewer: Haven’t certain individuals, the genius, great man, or hero, as Carlisle believed, been the prime determinants of human history?

Will Durant: There are many cases, I think, in which individual characters have had very significant results upon history. But basically, I think Carlisle was wrong. That the hero is a product of a situation rather than the result being a product of the hero. It is demand that brings out the exceptional qualities of man. What would Lenin have been if he had remained in, what was it, Geneva? He would have a little…. But he faced tremendous demands upon him, and something in him responded. I think those given us would have brought out capacity in many different types of people. They wouldn’t have to be geniuses to begin with.

Interviewer: Then what is the function or role of heroes?

Will Durant: They form the function of meeting a situation whose demands are always all his potential abilities.

Interviewer: What do you think is the important thing for us, in studying the course of history, to know about character? What is the role of character in history?

Will Durant: I suppose the role of character is for the individual to rise to a situation. If it were not for the situation, we would never have heard of him. So that you might say that character is the product of an exceptional demand by the situation upon human ability. I think the ability of the average man could be doubled if it were demanded, if the situation demanded. So, I think Lenin was made by the situation. Of course he brought ideas, and he had to abandon almost all those ideas. For example, he went back to private enterprise for a while.

One way we might corroborate Durant’s thoughts on Lenin is to ask another simple question: Which U.S. Presidents are considered the most admired? 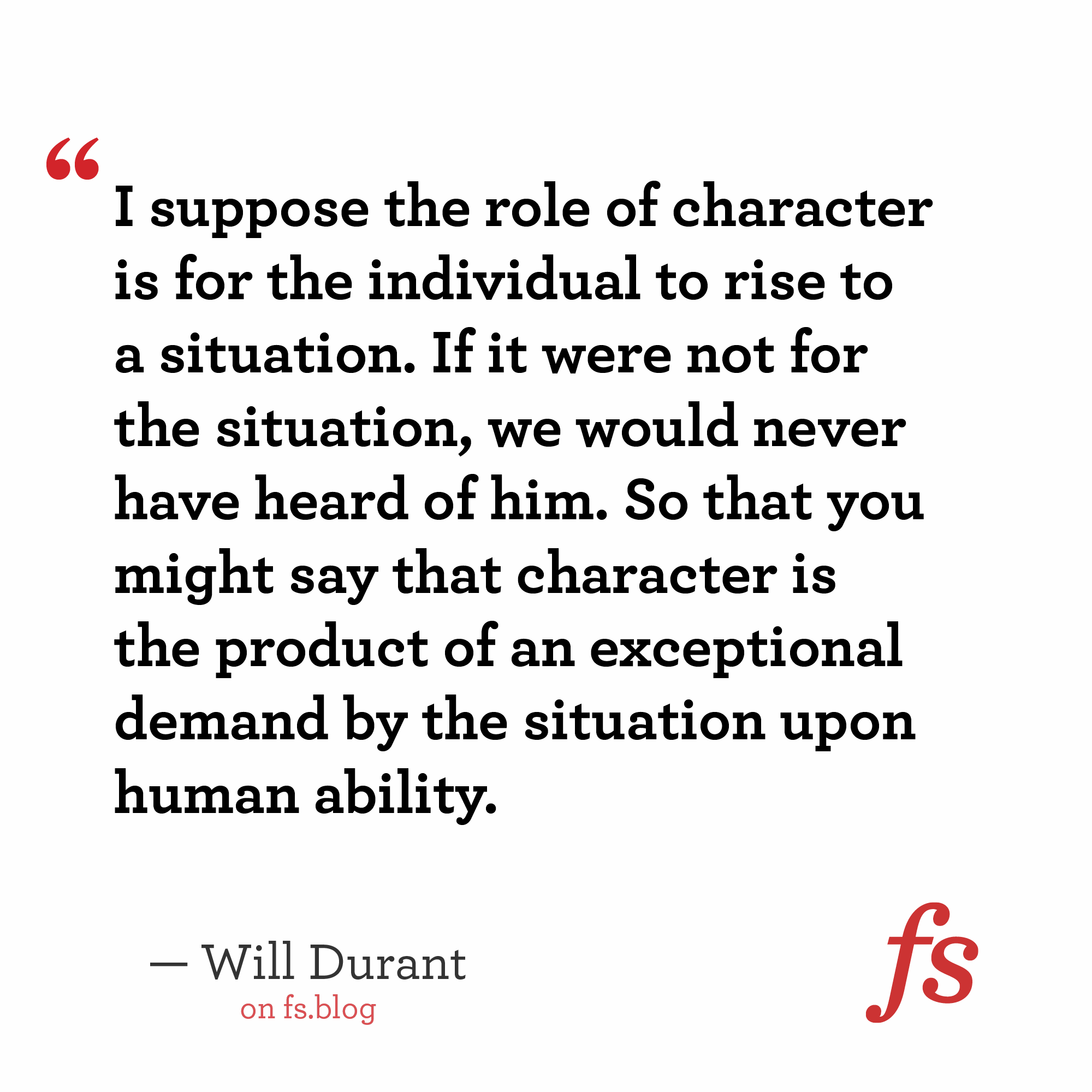 Students of history have three easy answers pop in (and polls corroborate): George Washington – the first U.S. President and a Founding Father; Abraham Lincoln – the man who held the Union together; and finally Franklin Delano Roosevelt – unless the U.S. amends its Constitution, the longest serving U.S. President now and forever.

All great men, certainly. All three of which rose to the occasion. But what do they share?

They were the ones holding office at the time of (or in the case of Washington, immediately upon winning) the three major wars impacting American history: The American Revolution, the American Civil War, and World War II.

And thus Durant gives us a very interesting model to bring to reality: Greatness is in many of us, but only if we rise, with practical expediency, to the demands of life. Greatness arises only when tested.

For the rest of Durant’s interview, and a lot of other cool stuff, check out the membership.

Next Post:John Gray: Is Human Progress an Illusion? “Straw Dogs is an attack on the unthinking beliefs of thinking people.” — John Gray *** We like to think that the tide of …