Socrates and the Search For Wisdom 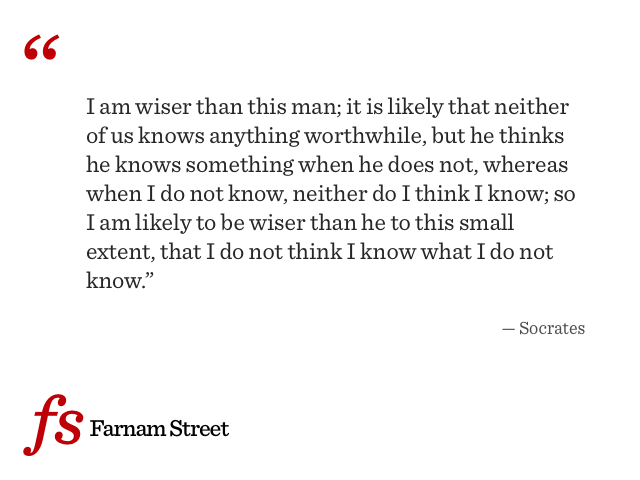 The arrogance of limited knowledge results in foolishness.

This is an excerpt from Plato’s Apology, from Plato: Complete Works (an excellent edition that is part of the Great Books program).

To set the context, while this is known as the apology it comes from the word apologia, which means not an apology as we know it but “a defense speech in a legal proceeding.” Socrates does not apologize. At the age of seventy he had been indicted for breaking the law against ‘impiety.’ That is, he was alleged to have offended the Olympian gods (Zeus, Apollo, etc.). The crux of it was on how Socrates had carried out his philosophical work in Athens. In the apologia, Socrates defends his devotion to philosophy as well as the manner in which he pursued it. He argues that he was not offending them but rather following their lead “in making himself as good a person as he can and encouraging others to do the same.” The gods, after all, want that people shall be good. But what is good? That depends on “the quality of our understanding of what to care about and how to behave in our lives.” The pursuit of this understanding was philosophy to Socrates.

… Consider that I tell you this because I would inform you about the origin of the slander. When I heard of this reply I asked myself: “Whatever does the god mean? What is his riddle? I am very conscious that I am not wise at all; what then does he mean by saying that I am the wisest? For surely he does not lie; it is not legitimate for him to do so.” For a long time I was at a loss as to his meaning; then I very reluctantly turned to some such investigation as this: I went to one of those reputed wise, thinking that there, if anywhere, I could refute the oracle and say to it: “This man is wiser than I, but you said I was.” Then, when I examined this man—there is no need for me to tell you his name, he was one of our public men—my experience was something like this: I thought that he appeared wise to many people and especially to himself, but he was not. I then tried to show him that he thought himself wise, but that he was not. As a result he came to dislike me, and so did many of the bystanders. So I withdrew and thought to myself: “I am wiser than this man; it is likely that neither of us knows anything worthwhile, but he thinks he knows something when he does not, whereas when I do not know, neither do I think I know; so I am likely to be wiser than he to this small extent, that I do not think I know what I do not know.” After this I approached another man, one of those thought to be wiser than he, and I thought the same thing, and so I came to be disliked both by him and by many others.

After that I proceeded systematically. I realized, to my sorrow and alarm, that I was getting unpopular, but I thought that I must attach the greatest importance to the god’s oracle, so I must go to all those who had any reputation for knowledge to examine its meaning. And by the dog, gentlemen of the jury—for I must tell you the truth—I experienced something like this: in my investigation in the service of the god I found that those who had the highest reputation were nearly the most deficient, while those who were thought to be inferior were more knowledgeable.

I must give you an account of my journeyings as if they were labours I had undertaken to prove the oracle irrefutable. After the politicians, I went to the poets, the writers of tragedies and dithyrambs and the others, intending in their case to catch myself being more ignorant then they. So I took up those poems with which they seemed to have taken most trouble and asked them what they meant, in order that I might at the same time learn something from them. I am ashamed to tell you the truth, gentlemen, but I must. Almost all the bystanders might have explained the poems better than their authors could. I soon realized that poets do not compose their poems with knowledge, but by some inborn talent and by inspiration, like seers and prophets who also say many fine things without any understanding of what they say. The poets seemed to me to have had a similar experience. At the same time I saw that, because of their poetry, they thought themselves very wise men in other respects, which they were not. So there again I withdrew, thinking that I had the same advantage over them as I had over the politicians.

Finally I went to the craftsmen, for I was conscious of knowing practically nothing, and I knew that I would find that they had knowledge of many fine things. In this I was not mistaken; they knew things I did not know, and to that extent they were wiser than I. But, gentlemen of the jury, the good craftsmen seemed to me to have the same fault as the poets: each of them, because of his success at his craft, thought himself very wise in other most important pursuits, and this error of theirs overshadowed the wisdom they had, so that I asked myself, on behalf of the oracle, whether I should prefer to be as I am, with neither their wisdom nor their ignorance, or to have both. The answer I gave myself and the oracle was that it was to my advantage to be as I am.

As a result of this investigation, gentlemen of the jury, I acquired much unpopularity, of a kind that is hard to deal with and is a heavy burden; many slanders came from these people and a reputation for wisdom, for in each case the bystanders thought that I myself possessed the wisdom that I proved that my interlocutor did not have. What is probable, gentlemen, is that in fact the god is wise and that his oracular response meant that human wisdom is worth little or nothing, and that when he says this man, Socrates, he is using my name as an example, as if he said: “This man among you, mortals, is wisest who, like Socrates, understands that his wisdom is worthless.” So even now I continue this investigation as the god bade me—and I go around seeking out anyone, citizen or stranger, whom I think wise. Then if I do not think he is, I come to the assistance of the god and show him that he is not wise. Because of this occupation, I do not have the leisure to engage in public affairs to any extent, nor indeed to look after my own, but I live in great poverty because of my service to the god.

Still curious? Plato: Complete Works is a great place to start. The translation is excellent and the editor, John Cooper, does a decent job of providing the necessary context.

Next Post:16 Leadership Lessons from a Four Star General “We like to equate leaders with values we admire, but the two can be separate and distinct.” *** Say what you want about General …