Harold Macmillan: The Fragility of Memory Those of us who have reached extreme old age become gradually reconciled to increasing infirmities, mental and physical. The body develops, with each passing year, fresh weaknesses. Our legs no longer carry us; eyesight begins to fail, and hearing becomes feebler. Even with the mind, the process of thought seems largely to decrease in its power and intensity; and if we are wise we come to accept these frailties and develop, like all invalids, our own particular skills in avoiding or minimizing them. But there is one aspect of the mind which seems to operate in a peculiar fashion. While memory becomes gradually weaker in respect of recent happenings and even of the leading events of middle age, yet it appears to become increasingly strong as regards the years of childhood and youth. It is as if the new entries played into an ageing computer become gradually less effective while the original stores remain as strong as ever.

This phenomenon has the result that as the memory of so many much more important matters begins to fade, those of many years ago become sharper than before. The recent writings on the tablets of the mind grow quickly weak as if made by a light brush or soft pencil. Those of the earliest years become more and more deeply etched. The pictures which they recall are as fresh as ever. Indeed they seem to strengthen with each passing year.

He goes on to offer insight on how people with special temperaments often fall through the cracks of history.

In every age there have been men whose memory will always be recorded for outstanding achievements in war, in art, in politics, or in literature. There will be other figures — more shadowy, more difficult to reconstruct, and yet as important in their contribution to the social and intellectual life of their time. Those who have not known them, or heard them speak, find it difficult to realize why the memory of such figures is cherished by their contemporaries.

Geoffrey Madan’s Notebooks then serves two purposes. To his friends, it makes it easy to recall his peculiarities. To others, it gives us a glimpse into the commonplace book of an interesting bibliophile with a peculiar sense of humour. 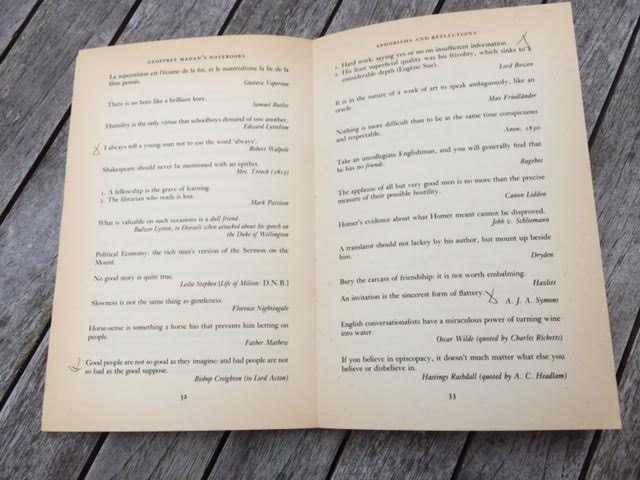 Next Post: Using Language to Change How We Think What kind of thinking leads to better outcomes? That’s the question that Roger Martin addresses in his excellent book Diaminds: …