“You know that I voluntarily communicated this method to you, as I have done to many others,
to whom I believed it would not be unacceptable.”

In 1685 English physician and philosopher John Locke published “Méthode nouvelle de dresser des recueils,” which explains his unique method of indexing his common-place book. Later translated from French into English as A New Method of Making Common-Place-Books, with a preface by Monsieur Le Clerc, who augments and clarifies the work.

Locke first began keeping common place books in 1652, his first year at Oxford. His system, as unique at the time as it is today, can be found on pages [vi] and [1] in A New Method of Making Common-Place-Books (image below).

In his letter to Monfieur Toinard, which serves as the basis for A New Method of Making Common-Place-Books, he explains the index, which contains a line for every letter of the alphabet and a subdivision along the lines of vowels:

I take a white paper book of what size I think fit, I divide the two first pages which face one another, by parallel lines, into five and twenty equal parts, with black lead; after that, I cut them perpendicular by other lines, which I draw from the top of the page to the bottom, as you may see (below) … Afterwards I mark with ink every fifth line of the twenty five that I just now spoke of. … I put at the beginning of every fifth space, or before the middle, one of the twenty letters which are defign’d for this use; and a little farther in every space one of the vowels in their natural order. This is the index or table of the whole volume, be it of what size forever. 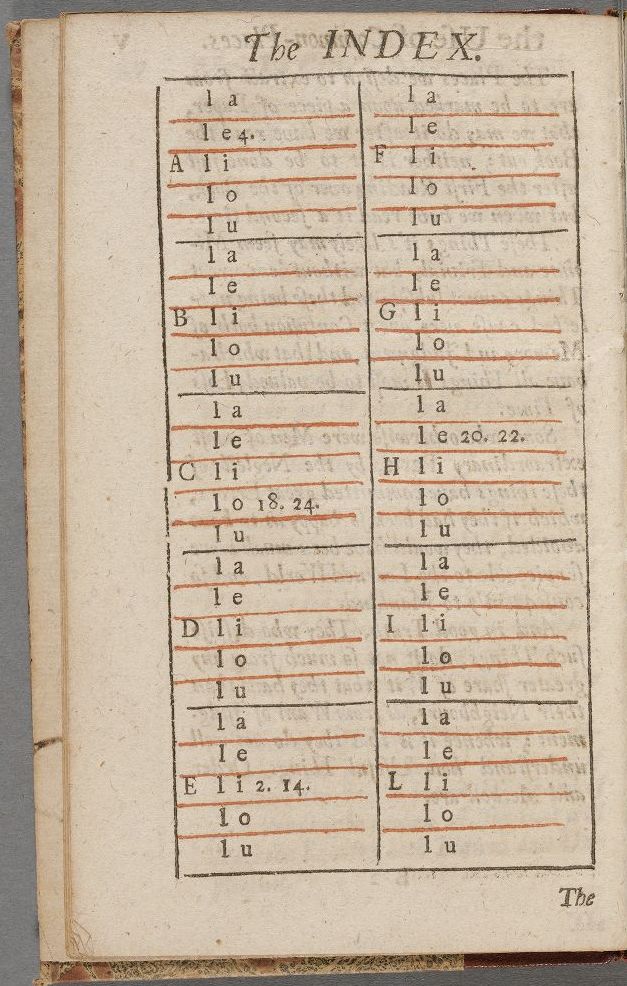 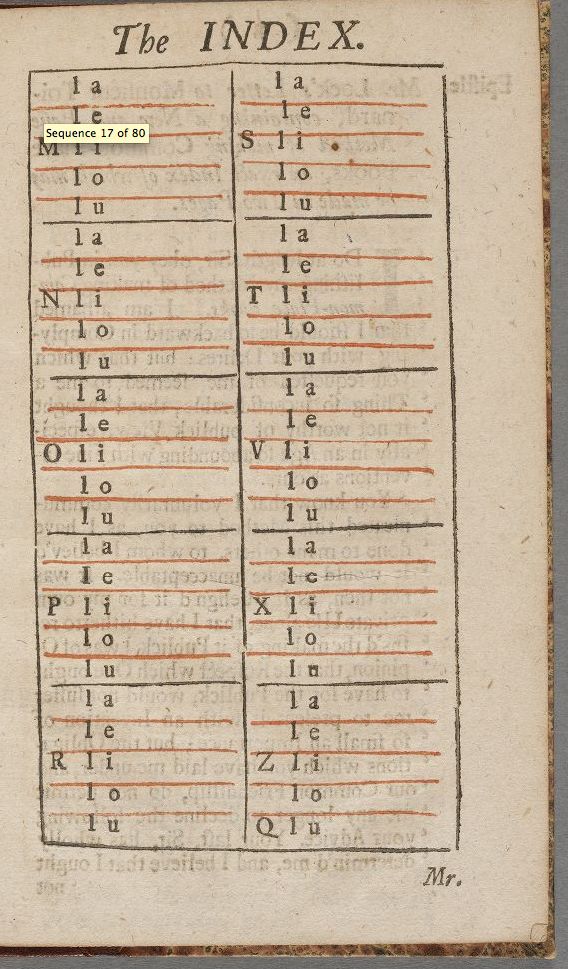 ” If I would put anything in my Common-place Book, I find out a head to which I may refer it. Each head ought to be some important and essential word to the matter in hand; and in that word regard is to be had to the first letter, and the vowel that follows it; for upon these two letters depends the use of the index.

When I meet with any thing worth putting into my Common-Place-Book, I presently look for a proper Head. Suppose for Example, the Head were Epistola; I look in the Index the First Letter which the Vowel that follows, which in this Case E I. If there is found any Number in the Space marked E I, that shows me the space designed for Words which begin with E, and whose Vowel that immediately follows is I, I must refer to the word Epistola in the Page what I have to take notice of, I write the Head in pretty large Letters, so that the principal Word is found in the Margin, and I continue the Line in writing on what I have to remark. I constantly observe this Method, that nought but the Head appear in the Margin, and on and on without carrying the Line again into the Margin. When one has thus preserv’d the margin clear, the Heads, present themselves at First Sight.”

When the two pages designed for one class are full, I look forwards for the next backside of a leaf that is blank. … At the tip of this new backside of a leave, I set down the number of the page I filled last. By these numbers, which refer to one another, the first whereof is at the bottom of one page, and the second is at the beginning of another, one joins matter that is separated, as if there was nothing between them.

[…]
Every time I put a number at the bottom of a page, I put it also into the index; but when I put only a V, I make no addition to the index; the reason whereof is plain. If the head is a monosyllable, and begins with a vowel, that vowel is at the same time both the first letter of the word and the characteristic vowel. Therefore I write the word Ars in A a, and Os in O o.

People in the Renaissance broke texts into fragments and used these to assemble and connect. It was, perhaps, the original remix culture and ultimate foundation of creativity.

Locke also advises having several books, “one for each science upon which one makes collections, at least two for the heads, to which we may refer to all of our knowledge, viz. , moral philosophy and natural; and perhaps a third, which may be called the knowledge of signs, which relates to the use of words, and is much more extent than mere criticism.”

At the time Locke’s method offered a solution to one of the biggest problems of commonplace books: how many pages to assign in a blank notebook to a new subject. By means of an example, one of Newton’s notebooks, “Certain Philosophical Questions,” which he began at Cambridge in 1664, listed 37 heads with a rather unsuccessful guess at the number of pages each would require. Locke’s method required no pre-assigned pages, which made it more useful for both the diversity of information one kept and the size of the repository.

Not all were fans of Locke’s Method

It is strange, indeed, that such a man as Locke, impressed with the value of method, should ever have adopted so imperfect and arbitrary a plan, or having once adopted it, that he should not have improved upon it’ for, surely, nothing can be more opposed to all method than the grouping of subjects together without any other bond of connection than an initial letter and a first vowel.

The object to Locke’s “Common-place book” is this,—that a number of totally different subjects are entered in the same page, or succession of pages, which subjects are held together by no other relation than that of an initial letter and first vowel. It is true, that so long as these entries are few in number, there is little loss of time in refereeing to them’ but if they become very numerous, many pages may be passed in review before the desired passage meets the eye. But even this inconvenience is not of sufficient moment to require the adoption of an improved method, where each of the several entries refers to a different subject. It is only from a great number of passages referring to the same topic as scattered through a succession of pages that the inconvenience of this plan is severely felt. It was this obvious inconvenience which induced me to adopt the improvement of devoting a separate page, or series of pages, to each separate subject. But even here I soon found the same objection to apply which lay against the common-place book of Locke. As long as the entries referring to any particular topic were few in number, my common-place book answered well-enough; but when the subject began to occupy many pages, I found that if I wanted to make use of it, to digest the materials which I had collected, to analyze them, or to write about them, I had to re-arrange the whole, and to place extracts or facts of my own observing which related to one part of my subject, or threw light upon any isolated question connected with it, by themselves, that by viewing them in connection I might better understand their bearing, and estimate their value. Thus the initial labour of inscribing the several extracts or facts in my common-place book had to be repeated with regard to all those parts of my subject to which I was induced to pay particular attention.

Locke’s method was used for at least one hundred years.