Blog  Thinking  The Work Required to Have an Opinion

The Work Required to Have an Opinion

“I never allow myself to have an opinion on anything that
I don’t know the other side’s argument better than they do.”
— Charlie Munger

While we all hold an opinion on almost everything, how many of us do the work required to have an opinion?

“We all are learning, modifying, or destroying ideas all the time.
Rapid destruction of your ideas when the time is right is one
of the most valuable qualities you can acquire.
You must force yourself to consider arguments on the other side.”
— Charlie Munger

As Rabbi Moses ben Maimon (1135–1204), commonly known as Maimonides, said: “Teach thy tongue to say I do not know, and thou shalt progress.”

The work required to hold an opinion means that you can argue against yourself better than others can. That is the time you can say, “Hey, I can hold this view, because I can’t find anyone else who can argue better against my view.”

Great thinkers, like Charles Darwin, did the work necessary to hold an opinion. And it’s one of the biggest reasons he’s buried at Westminster Abbey.

Doing the work counteracts our natural desire to seek out only information that confirms what we believe we know. When Darwin encountered opinions or facts that ran contrary to his ideas, he endeavored not only to listen but also not to rest until he could either argue better than his challengers or understand how the fact fit. Darwin did the work. It’s wasn’t easy, but that’s the point.

The difference between the people who do the work and the people who just reel off memorized opinion is huge. When you do the work, you can answer the next question. This became clear when I was working toward my MBA. I was surrounded by people who could answer the test questions. They got good grades — actually, they got great grades. But an odd thing happened after school: a lot of those people couldn’t apply their knowledge to problems they hadn’t seen before.

They were chauffeurs — they knew the memorized answer. They couldn’t answer the next question. We’re all chauffeurs in some aspects of our lives. This is why understanding your circle of competence is so critical to living a rational life.

“The ability to destroy your ideas rapidly instead of slowly when
the occasion is right is one of the most valuable things.
You have to work hard on it.
Ask yourself what are the arguments on the other side.
It’s bad to have an opinion you’re proud of if you can’t state the
arguments for the other side better than your opponents.
This is a great mental discipline.”
— Charlie Munger

Doing the work means you can’t make up your mind with a high degree of confidence right away.

Doing the work forces you to challenge your beliefs because you have to argue from both sides. You become the somewhat impartial judge. What’s on trial is your opinion.

If you want to work with the world rather than against it, one of the major leverage points you can put effort into is how to distinguish between the people who’ve done the work and those who haven’t. The ones who have will pass the Batesian Mimicry Test. 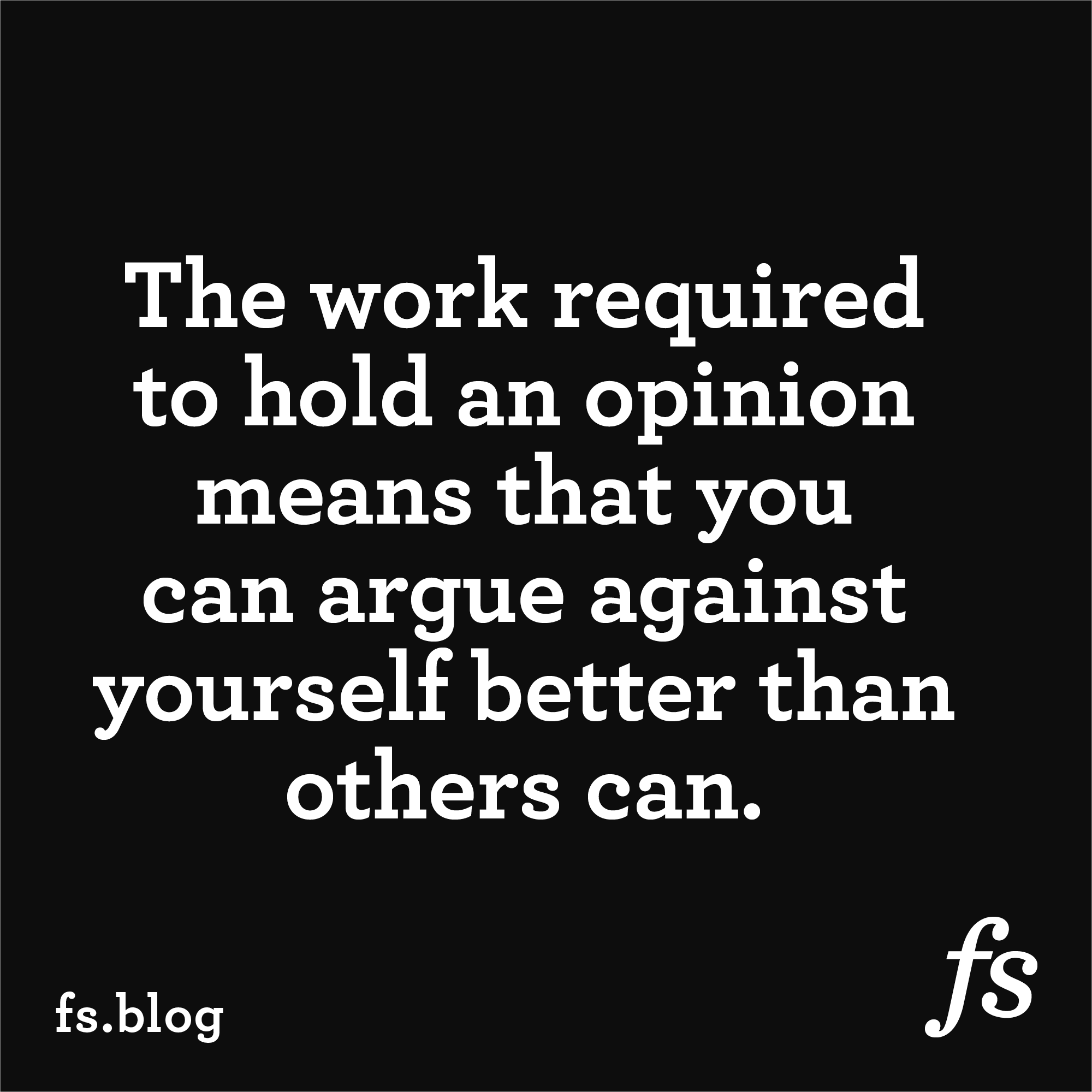